So recently I started this thread that I don’t want trade with corporate accounts but only with indivdual accounts.

I also immediately after starting this trade I requested mediator because I didn’t want to take the trade for mentioned reasons. I told my tradepartner and mediator from the beginning I don’t want this trade and rather pay the penalty.

But apparently the mediator didn’t take the time to understand and read my issues and just continued with copy paste message to continue the trade.

Here is messages with me and the mediator:

Here is the response that I got after a while from tradingpartner: 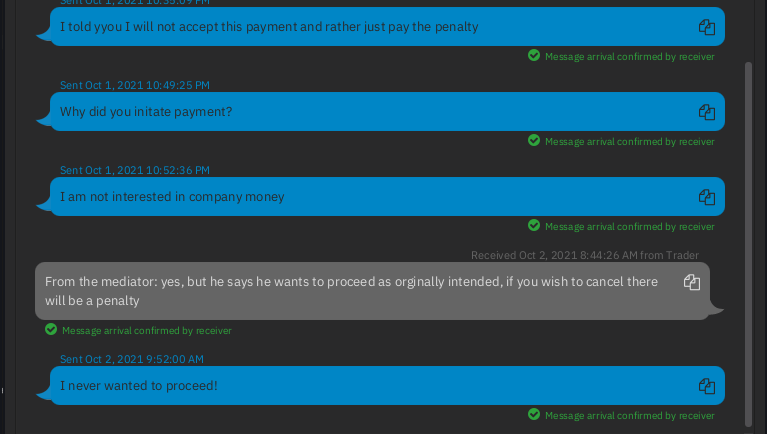 I also told the mediator immediately about the thread in this forum I posted above and made clear I don’t want this trade. So I don’t understand why he would tell the tradepartner that I want to continue as originally intended.

Now the tradepartner obviously sent the SEPA transaction because he thought I want to continue the trade (WHICH I DONT!!! to make it clear I just need repeat myself 2000 times I suppose).

I’m sorry, but it has become quite frustrating after saying so many times I don’t want this trade why would the mediator even say to continue as usual?

How can/will those careless actions by mediators be dealt with? It makes not only a frustrating experience but also invokes big lack of trust and the people running bisq/the mediation.

I think communicating with your mediator is the best way to resolve this.

Also, it is important to understand under what context things are said. When someone does not have all the information things can get misinterpreted.

I also do not think it is helpful to publish trader / mediator chats during an ongoing dispute without the consent of all parties.

Remember mediation is about making suggestions not delivering verdicts. If a trader is unhappy with an outcome they have the option of taking the trade to arbitration.

In summary I think it would be better to complete the trade and then, if appropriate, look to do a postmortem / discussion of issue.

Im new to bisq, but the rules seem pretty clear and are governed by smart contracts on blockchain. IT doesn’t have any option to opt out because it’s a company. IF you were willing to pay penalty I don’t know why the buyer didn’t jsut accept that. YOu could continue to not accept payment and then maybe buyer would open arbitration. then you could have shown that you already offered to pay the penalty so yo should not have to pay any of the additional fees for arbitration. And yo could have said that “now” (ie at time you wrote this post) while it was still in mediation.

I remember this issue, it was a debated one as the counterparty was/is a company, and the seller discovered this only at the time of offer taking, obviously.
There is no rule on Bisq about this specific case, since traders can be “anything” as long as they follow the rules.
I understand both the concerns of the seller (who supposed the corporate buyer would have declared the expense to buy bitcoin in their official ledger, placing the seller’s name in an official government statement) and the decision of the buyer (which is obviously to buy bitcoin no matter what

).
In the current state of things, there is no way to prevent the situation.
If something has to be done, it could be to allow for a field in the payment account settings that allows to declare if corporate peers are welcomed, or not, pretty much like you declare the currencies/countries you wish to accept the payment in/from (and also another field to declare if one is a corporate entity, or not); I understand thought that this is not a priority; still, anyone can make a proposal to the DAO if they so wish.