before the update usually, when the trade was above my limit the trade was greyed out
and I got a message how old my account is and what my limit is.

My accounts are all in the 30-60days range and when I try to start a SEPA trade that has a range of 0.2 - 0.26BTC I can open the trade (I dont get error message that my account is too young)

but when I try to enter the amount of BTC I want to buy it says “your account is only allowed 0.1250BTC trade” (even though its 30+days old). But I was able to start the SEPA trade that has starting amount of 0.2BTC, so why is this possbile if my account supposedly is only allowed trades of max. 0.125BTC

I think the updated didnt update the age correctly of accounts that were already in bisq otherwise I dont really udnerstand the errors and why would you allow me to start trades with amounts that my account supposedly isn’t allwoed to trade anyway.

Hope I made the issue clear, hard to describe for me.

Can you help me how to fix this? 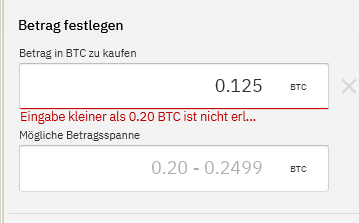 Also Iwould appreciate if when an error ike this occurs I dont always have to lose my BTC for starting a trade.

I already have lost like almost 0.01BTC combined with all the trades that I wanted to start and got an error like this where it is clearly not my issue or problem, but I still have to pay for that.

Please change the system in that regard that it somehow works without the buyers having to invest money and “hope” it works, and if it doesn’t well, money is gone…

@NCKoeter
If you feel there is lost money which is not your fault,
you can use https://github.com/bisq-network/support/issues to ask for reimbursement.
Just take care to use the same issue format as others, describe well the issue, and provide the informations asked.

Yes, you should ask for a refund for the fees since they seem to be due to bugs.

The way that Bisq is built, it is likely that the account age only updates if both traders have updated their clients. If the other trader still thinks someone with your’s account age can only trade half of the amount, their client will not allow you to take their offer.

It could be a different story if you created an offer yourself.

How have you lost trading fee? If there is a bug with incorrect trade limit is should not allow you to take an offer but that does not result in lost fees.
Reimbursement requests are only for failed trades or take offer attempts where a lost fee occured (need to provide tx which proves your loss).
I don’t have time atm to look into the issue but it might be that the offer was created by an old client and therefore it behaves a bit different. That should fade out soon. But I would need more time to test/investigate. Feel free to open a Github issue so such bugs are better tracked than here.

Hello, I will take the loss, because I have since then several times reinstalled bisq started with new data directory etc and therefore dont have the links and IDs of the fialed transactions anymore

But basically what happened was, that I started the trade and paid the miningfee and trading fee. It never came to the point that i had to pay the deposit because there was always one of the mentioned errors.

But when I restart bisq after the rror happened, it was always some BTC missing, that would fit into the amount of those fees. I never paid too much attention to it, because it seemed a very tiny amount, but after all those failed attempts I realised how much it added up to together.

Ah ok. Those are failed take-offer attempts and up for reimbursement. Sorry I was just thinking in the above description that you was just not able to take an offer due the limit issues, that should not cause a failed trade.
If you get again such an issue please report it and send the log file. With 0.9 release such issues should be very rare now. But some users might not have updated and if maker has an old version it still can cause a timeout in the take offer process which can lead to lost trade fee.

The time_out errors still happen a lot (i’ve got about 50 failed trades since october 2018 from that).

I’m not completely sure how they happen, but i noticed that most likely they fail when someone else tries to take the same trade at the same time and is slightly faster than me. 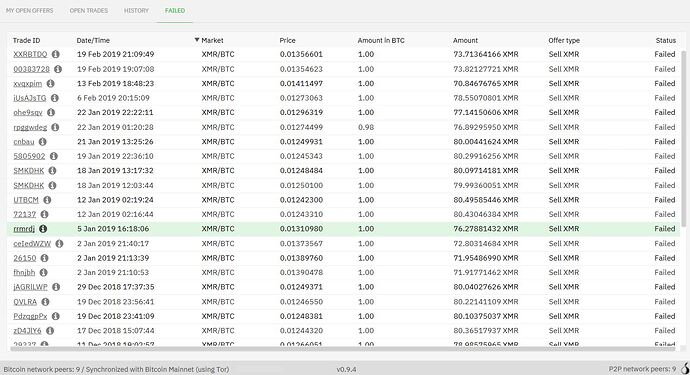 If the logs would be of any help, let me know. I’m happy to help

Is you Internet connection otherwise stable?
Tor can be a little bit demanding on the network traffic and stability.

yeah internet is fine. it used to be worse when i was in holidays in a 3rd world country.

I should also add, that in perspective to the amount of completed trades, the ratio of failed ones is still quite low (got about 500+ successful ones), and they generally only fail during busy hours.

Your experience with those errors is very interesting.
Thanks for the return.

no worries. I was planning to write some extensive feedback about bisq as a whole but i’m still trying to get a bigger data set to get a better judgement on how certain errors happen.

Ah great thanks for the feedback! I did not expect that so many happens! Our P2P dev will prioritize that issue, hope we find out soon.
My assumption is that the maker is in standby mode, the offer still gets published with throttled network but when taking an offer the timeout gets triggered as network of peer is too slow. At least that was observed with OSX and fixed in 0.9 and reduced a lot of those failed take-offer attempts.
I assume you have been the taker here as well, right?
We have a new release next week with an important feature for DAO testing. I will try to increase the timeout at take offer process to see if that helps to avoid such issues.
Beside that we need to look into the standby behaviour of different OS and see if the solution we implemented for OSX works there as well or if there are still issues.

We still get many reports for timeouts at the take-offer attempt. See https://bisq.community/t/0-9-4-update-trade-limit-doesnt-work-correctly/7134/ I assume a reason is standby behaviour at different OS....

And great thanks for being a XMR liquidity provider!

Could you send me yoru log files? You can open the data directory at Account/Backup. In the data dir are the logs. Would help me to find out the reasons for the failed trades. My email is manfred@bitsquare.io.

sure thing, let me have a look

The timeout is already 2 minutes, I think we cannot increase that. I would rather decrease it back to 1 minute as it was in earlier days.
But I made a PR (https://github.com/bisq-network/bisq/pull/2488) which avoids that the taker fee tx gets published before the taker hears back from the maker. That should eliminate those issues completely.