.03 Security Deposit Lost Due to Bug

After not being able to complete a Zelle payment, the trans went into dispute mode. I had provided the necessary details like the arb asked of me, but he continued to ask the question. It became apparent when the arb closed the dispute that he was not receiving my replies even though they had posted for me. .03 btc is not an insignificant amount of BTC so I hope something (at least a fixed bug) will come out of this. I have images which support this claim, but can’t see where to upload them.

Hi, I was the arbitrator for that case and I am sorry to hear that I did not received your messages. I am not aware of a bug in that area but there can be network conditions when the message does not arrive (e.g. you are badly connected and the connected peer disconnects before the message gets broadcasted further), or there is a bug on your side if that happened repeatedly.
The security deposit goes to the other peer as reimbursement in such cases. So I would appreciate that you change the title of the thread as nothing got stolen. As I see in you screenshot you used a credit union which is not supported for Zelle. In the account setup there is a popup where the supported banks are listed and it is stated to not use other banks and if not following that requirements might lose to losing the deposit (see screenshot below). So beside to the issue that I did not received your messages that would have also been a reason to lose your deposit as you did not follow the instructions in setting up the account with a credit union, which are not supported. We are usually tolerant in such cases, but just wanted to point it out…
I can try to contact the peer if he is willing to send you back the deposit. 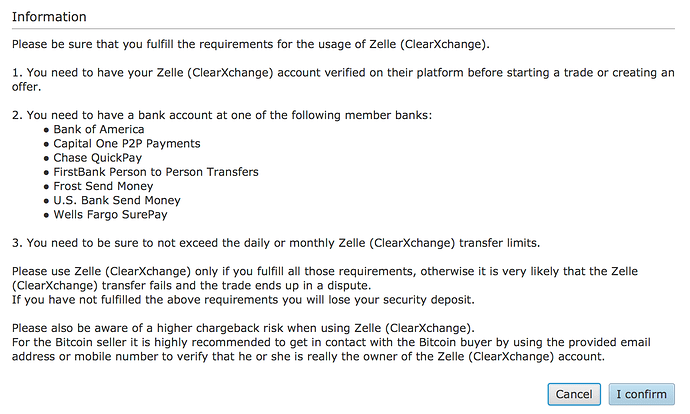 PS: I changed the word “stolen” to “lost” in the title.

Sent a message to him and asked to post here if he sent it. Check your wallet once a day to see if you received it.

Thank you. I agree with the title change but unfortunately it does pay to be clickbait-y. I thought I had read that this applied to receiving money (seller) and not buyer, but I realize the error now and understand the consequences. It is discouraging to lose lose to $130 regardless.

I hope the peer will refund you. I would not have taken the deposit in that case, even the rules are set to that, as I try to be tolerant in cases of not bad intentions.