Sorry if my feedback is in the wrong forum.

I love the idea of bitsquare and have updated to the latest version. I am a .NET developer and test automation specialist by trade, and would like to contribute to what I see is a great idea.

I’m however confused about the UI options, and I think this will probably affect others aswell.

As a user, I would like to purchase bitcoin from a seller, using Bitsquare. I open the Bitsquare software, and click ‘Buy BTC’ menu. In my country currently there are no offers here. If I click ‘Sell BTC’ there is 1 offer.

The ‘Sell BTC’ page is generally confusing. The heading of the page says ‘Offers for selling bitcoin’, does this mean people here are selling Bitcoin? I would like to buy bitcoin, there is 1 ‘Offer to sell bitcoin’, so naturally I would like to accept this persons ‘Offer to sell bitcoin’. There is some weird column titled ‘I want to’ with a button giving me a different action again, ‘Sell Bitcoin’. Does this mean the person is instead wanting to BUY bitcoin? This person is BUYING bitcoin under the ‘Offers to sell bitcoin’ list ?

Overall, pretty messy and isn’t inspiring me with confidence, i don’t want to click the wrong thing here and lose money. This needs to me far more streamlined and idiot-proof.

Yes that topic is difficult as the offer is always the opposite of your intention. If you want to buy u are interested in offers of people who want to sell. Mayeb its best to remove the " for buying bitcoin" and just name it “Available offers”?
Renaming the button has a bit limitation with the column width. For me the combination with “I want to:” sell bitcoin seems pretty clear. But of course I am biased

But I am open to changes and aware of the confustion. Just need to get it right for the Beta so would appreciate more feedback before changing it.

I wrecked my brain about this as as well since the topic comes up again and again. I’m still not 100% satisfied.

My proposal would be:

Create offer buttons should be different colors. Creating offers is something that needs to be clearly distinguished from taking offers as it’s a completely different thing (like consumers vs producers)

The convention (base case, there are numerous exceptions) is price currency for one unit base currency. Its like when you invest in a stock. The price is quoted per one share. All currency pairs on bitsquare are quoted per one unit BTC!!

Drawing from this convention suddenly making the base currency BTC to the price currency is confusing at best. Its seems as one is trying to make it idiot proof but in the effort achieving the opposite.

Starting by the convention one could get rid of the buy BTC / Sell BTC tab. Show the order book in the market tab, more levels, either by introducing a scrollbar or/and reduce size of the order book chart. Scrollbar has definitely the advantage.
Rename the button sell/exchange selected currency for BTC. e.g. USD for BTC or buy USD for BTC.

There is some info on the “buy BTC / Sell BTC tab” that needs to get squeezed into this proposal. Orders in the market tab are already separated by Payment method. One problem less.
How to indicate min. executable size? A new column? How to indicate whether its my own order? ‘grey out’ the payment method as it is in the ‘buy BTC / Sell BTC tab’. but how much work would that be?

One more, make the payment method a button like that in the ‘I want to:’ column. Pre-filling etc. and get rid of the button on the bottom of the market tab. Ignoring the earlier renaming proposal. 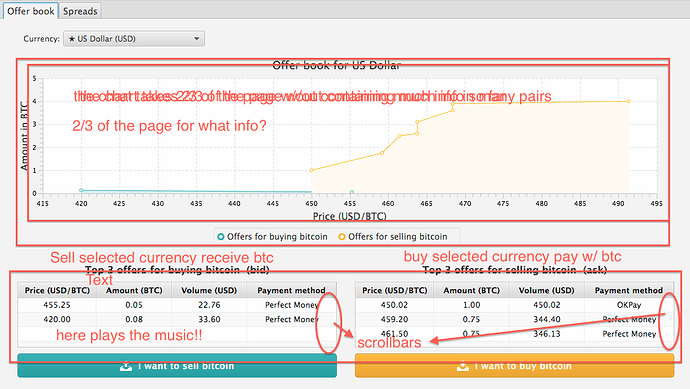 Even though I understand alf’s proposal, and I have already given some of my hints in an issue on github, I believe it is way too much work for the Beta. However, I do think the market tab needs an eventual overhaul. One thing I have to add is that it needs the payment method filter too.

For the Beta, I suggest we go with marc’s proposal and i also propose to rename the “create new offer for buying/selling bitcoin” to simply “Create new offer”. People already know what offer they are creating by the screen they are in.

The content which needs to get displayed is too much for the overview. There will be more advanced filters also in future, and the columns will not fit for 2 tables. The screen is already too large. I reduced the tables to 3 rows and removed the scroll bar to avoid that things are double handled (market and buy/sell screen is the main sceen). But I agree that the screen needs improvements but its too much work for the moment to dig into that.
The overview should just give an intro and probably more statistics/charts in future.

Was also wondering to change the button names as suggested but everybody has other opinion and I am not convinced on any of the changes so far.
I changed it already a few times and some people reported that “create new offer” was not sufficiently clear to them, so I added the additional longer descriptive text. Also in the buy/sell screen when u selecet “show all” u dont have a currency selected so “buy BTC for USD” would not work in that case.

I know it is all not perfect yet but main goal for the moment is that people dont make mistake with buy/sell (happend to me on stock exchanges, its a general problem on all exchanges IMO).
Once I have a fulltime UI dev and a designer we can work on larger improvements…

Though I will change the offerbook titles (Offers for buying btc) as that is too confusing. Will use only “Available offers”

If the chart is removed or reduced there is a lot of space.
Even with the chart one should display the same information in the Market tab as is available in the Buy/Sell BTC tab!

Starting from the convention (amount of price currency for one unit base currency) the only price column needed is ‘Price (ETH/BTC)’. The information (in the Buy/Sell BTC tab) which kind of order it is resp. if its a percentage order and what spread is defined is not relevant. Would you buy a 100.000 dollar car only when whether you know about the dealers spread/edge/margin ?! No. Its his margin that he needs to provide his service. the only thing is the price!!

There are two different payment columns. Could the one that provides add. info moved to the market tab order book?

In the market tab is always a currency selected!! Only in the Buy/Sell BTC tab one needs to select and filter for whatever.

Now there are only three colums and you could the button from the ‘I want to:’ column. While some prefer Price clickable … This is not the point. The point is that we speak about the same thing. It didn’t seem so far.

Thanks for your suggestion.
Need to think more about that in future when I have time for bigger UI changes.

First there was a need to see some orders in the order book so people could do ‘test’ trades. You solved that with the ‘percentage order’.
Now people want to do ‘test’ trades to see how it works but get confused. The process & information need to get ‘stream lined’.
You have your reasons for the layout and put a lot of time, work and energy in designing the widgets, canvases, menus, fields, buttons etc. But the topic doesn’t pop up again and again without a reason I guess. Best

I am very aware that it needs improvement! I am just not able to squeeze in a big change atm. I am on tour presenting Bitsquare in 15 cities from next week on for nearly 6 weeks with a few days break.
So that will need a bit more time to get it right.
The wording I changed already a few times and different people with different background have different opions about it. Professional traders see it different as casual trades of newcomers. To serve all is pretty hard…

In the case of altcoins it gets even more confusing. I set up an account for Verge but I’m not able to ‘Sell Verge’ only ‘Buy Bitcoin’. Then the amounts are ridiculously small.

The fees for such a small sale are also too high. It’s only suitable to sell in units of 1M XVG or so. With sales from alt to btc both seller and buyer avoid banks and artificial delays, and automatic escrow could be used, so the fee could be smaller.

The current code is optimised for dealing with fiat currencies. Crypto-to-crypto trading could be improved a lot.

No, it is not entirely correct that you need to use a calculator to work out the sum you will receive. If you choose to sell crypto X, you get to choose the amount and price on next page. If you first enter your price (fixed or percentage) and choose your crypto amount second, then the BTC field updates automatically with the amount you will receive. So, no need for a calculator.

And of course, sales of a too small size wont scale well. It is completely reasonable for there to be a minimum fee. There are network associated fees, arbitration fees that cant be infinitely small.

I have traded quite a bit between cryptos and have found it to work just as well as fiat trading. My only complaint at the moment is the return of ALL cryptos in the “Filter by currency” dropdown which makes navigating between the 3-4 markets I trade on ~20 times slower than it needs to be.

Thanks, yes I forgot that you could enter the quantity rather than the BTC price.

You should be able to filter out altcoins (and fiat currencies) of no interest by deleting them in the settings page under ‘Currencies in market price feed list’ but it doesn’t seem to work for the dropdown box. I might make a feature request for that.

The UI and concept was designed for btc-fiat only initially, so yes altcoin trading would need some ui improvements, but as said in other threads we need a dedicated UI dev to get those tasks done.
2 devs are working on APIs and support for automated altoin trading is on the roadmap.
Tiny quantities of altcoins are probably not a realistic use case. the smallest trade amount is 0.0001 btc which is already as low as about 6 USD cent.
The fees are for protecting the network against spam (create offer fee) and for protecting the offerer against data harvesting (in case of fiat trades the bank account data get exchanged in the last step, without fee one could just take all offers and then let the code stop after he has the data, so the taker fee adds at least costs to such attacks).

Yes the currency list will be fixed once i am back form vacations. Sorry that I messed taht up with the latest release, was a last minute change…