How Many Times Do I Pay Mining Fee?

Due to a botched transaction where seller got paid & I didn’t receive BTC, arbitrator placed BTC in my BISQ wallet, on trying to transfer it to my external wallet: 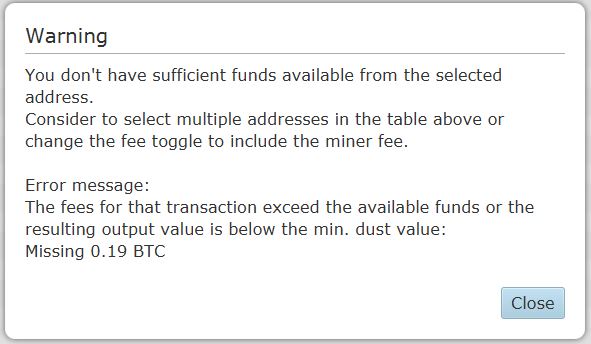 Why am I being asked to pay miners fee again? I already paid when buying BTC, how much is the miners fee?

When you transfer BTC from one bitcoin adress to anoother, you always have to pay mining fees.
It’s fees for the bitcoin miners, and has nothing to do specifically with Bisq.

Yes, Bisq wallet is a real wallet with Bitcoin addresses that only you control.
When you move your funds from one to another address inside or outside of your wallet, you need to pay a mining fee to the Bitcoin network so they include your transactions in one of the next blocks.

You can go to Settings and change the withdrawal fee to whatever you like. I assume 10 sat/b should be fine.

Thanks for the replies, what happens when amount of BTC reaches max & mining stops, will fees stop?

The “mining” process concerns a whole block of many transactions. (It happens every ~10 minutes).
When the block in which your transaction is, is mined/sealed, you have payed the fee, and its finished. You pay the fee just once.

I don’t understand what you mean by :

when amount of BTC reaches max

Sorry if I misunderstood your question.

I think @Dynamata meant to ask if the mining fee will not be necessary when all Bitcoins are mined (in about 100 years).

No, that is when it will be even more crucial that Bitcoin transactions have a mining fee, since miners will not have newly minted coins as a reward, just the mining fees from the transactions that they included in their block.

Yes that’s what I meant. So if I mine gold & sell it it’s gone but if I mine BTC then sell it, I own the “copyright” & am entitled to a fee every time it moves?

No. The process of mining is actually just gathering transactions that were broadcasted to the network and structuring them into something called a block. All of the Bitcoin blocks have to be in a certain mathematical relationship with each other where together they make a chain (blockchain).
Figuring out how to make a block that is in this relationship with the other Bitcoin blocks is a very computer intensive work (basically just guessing the solutions, brute forcing).
For this work miners get paid in two ways, they get newly printed coins and they get whatever mining fee the transactions that they chose to include in their block. This mining fee can be set by the users to whichever value they want, but blocks are limited in size by design, so users compete with their mining fees to get included in a next block.

“Eventually, predicted to be sometime around the year 2140, all Bitcoin will be mined and there will be no more Bitcoin rewards. Mining will cease. Miners will instead turn into transaction processors and be rewarded with transaction fees”. (Crypto Revolution by Sam Volkering)

Anyway, now BISQ will not connect to network so have to recover my account.

“Eventually, predicted to be sometime around the year 2140, all Bitcoin will be mined and there will be no more Bitcoin rewards. Mining will cease. Miners will instead turn into transaction processors and be rewarded with transaction fees”. (Crypto Revolution by Sam Volkering)

I guess the author of this quote wanted to make a distinction between the process of mining before and after all bitcoins are mined so he stopped calling them miners. In reality the process will not change at all, miners will be running the same algorithm and do the same work.

Anyway, now BISQ will not connect to network so have to recover my account.

Do you have any open trades or offers? If not, you could try going to Settings->Network Info, then click on the “Open Tor settings” button and then the button at the top to delete the outdated Tor files. That might help.

No open trades but some BTC, the program won’t start at all “UnreadableWalletException: Wallet contained duplicate transaction”

Easiest would be to restore from backup if you have it.
If not, you could rename your Bisq data directory and startup Bisq from scratch to recover your funds with seed words.

Have seed but no backup, unless there is auto backup. Copied BISQ folders to another location.

Coping Bisq data folder is as good as backing up, as far as I know.
You can find some backups in btc_mainnet/wallet/backup/backups_bisq_BTC_wallet in your data directory,

Essentially your wallet got corrupted somehow, but don’t worry, as long as you have your seed words your funds are safe. 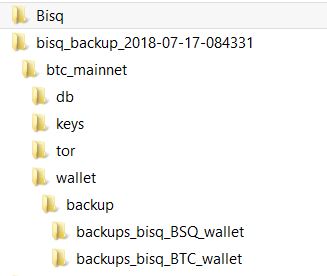 How do I restore?

Look at the dates when those backup wallets were created in that folder.
I think all you need to do is replace bisq_BTC.wallet in the wallet folder with one of those backups and restart the app.

So try finding the a wallet file in that folder that was created when your Bisq app was working correctly (before the duplicate transaction error), copy it and paste into the wallet directory, move bisq_BTC.wallet somewhere else for safekeeping and rename the backup file that you pasted into the folder to bisq_BTC.wallet.

Sterling job! I’m in with everything intact & transferred BTC to external wallet. I owe you one.