I’m Kristofer and I work as a UX-designer and usability tester.

I think bitsquare is really cool and definitely the next level shit when it comes to cryptocurrency. I’d love to put my skills to use for this project.

I put together some very high concept ideas for the ux, I know all features and such are not included. The idea is to try to spark a conversation. If this is supported by the core team(Manfred?) and someone would like to collaborate with me on this, on the tech side. I’d love to finalize this concept – complete all ux needed and doing some usability studies on real actual humans. 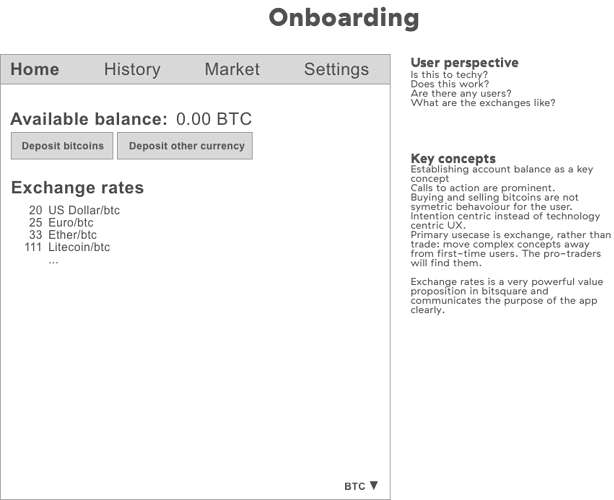 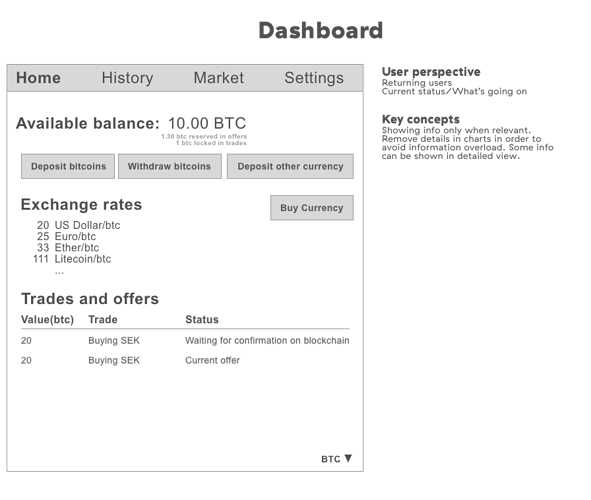 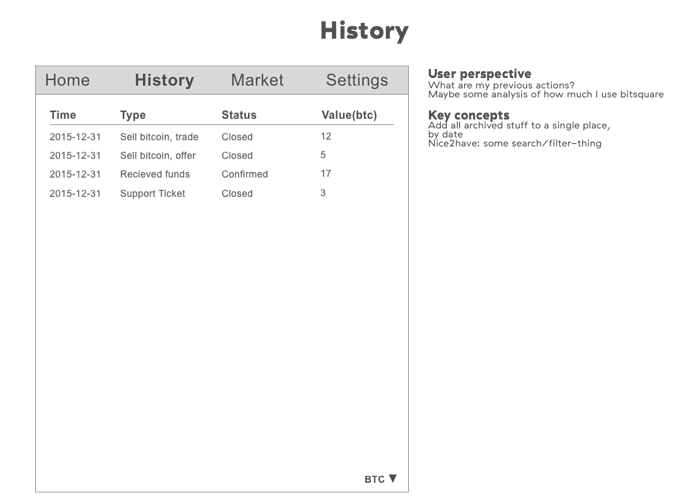 Hi,
thanks for the suggestion!

One comment regarding “Deposit other currency”: The altcoin (or Fiat) is handled outside of Bitcoin, so there is no way to deposit an altcoin. Integration of popluar altcoins might be a feature in some future, but nothing what is planned soon (too many other things to do: DOA, dec. arbitration system, APIs, CoinJoin, Fiat account integration with OKPay/PerfectMoney, trading bots,… ).

I am atm not able to do a complete rework of the UI as that would be too much effort. Though I am aware that there is much headroom for improvements and even a complete redesign is something I would consider once I have the resources (1 UI dev, 1 designer).
Small improvements and changes are certainly welcome, and specially the Home screen has much headroom for improvements, but I need to set priorities and as long I dont have a dedicated UI dev I fear such stuff need to wait. Changes which are relatively small I might can squeeze in.

What I meant by “Deposit other currency” was really what is now called “I want to buy bitoin” in the current system, as the bitcoins are paid into the bitsquare wallet, I thought this would be a good phracing, but it doesn’t really indicate that a p2p trade is taking place (including the risk and timedelay etc) so maybe buy bitocin would be better.

I totally understand and agree that this is not (and shouldn’t be) the primary focus of the project at this time. Ux input at this level often comes to late, so I wanted to get a head start and maybe spark some inspiration. Let me know if you find a UX guy, I might be able to get a graphic designer aswell.

Although, I don’t really think the ux need a design overhaul, I think it’s good that the ux has the same style as other bitcoin-apps like bitcoin qt. Maybe just pick a colorscheme and be a bit more consistent overall with buttonstyle, between the web and app(flat ui or not, radius of roundness of buttons etc)

Although it is already while ago since your postet your remarks I just wanted to catch up and get your input on the current development state of the bisq client. I just joined bisq recently to support in UX & Client Development and created to click-prototypes to collect feedback. It would be great, if you could click through the prototypes and leave your remarks and ideas.

Thanks for your support!