I had an offer to sell a little amount of NAV that has been taken. But the taker information does not contain a deposit transaction id. Neither it gives me any information on the takers NAV address.

Here is a screenshot: 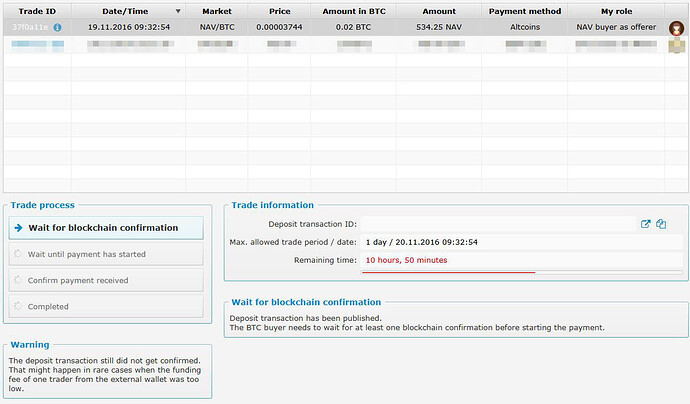 The deal (and the problem) appeared after I deployed v0.4.9.8
I tried to raise a support ticket already but did not find the multisig tx

What can I do?

Thats caused from the bug from the prev. version (if any of the peers had the old version it can happen). Please open a dispute by ctrl+o or cmd+o.

Please open a dispute by ctrl+o or cmd+o.

that is what I tried. But since the tx id is missing I need to select the offer fee tx id. And I cannot find it

Ah damn, lets wait for the peer if he can open a dispute. If he does not open in 1-2 days ping me by email or PM here.

You opened a dispute, right?

yes right - but it was more accidently than intentionally