I thought I’d start this thread for small improvement suggestions to the UI that hopefully aren’t out of the bandwidth of the dev capacity right now.

First off, the most confusing thing that could be fixed easily is the price quotes are the wrong way around and erroneous from proper forex/exchange convention.

I know that but can you explain me what math has created that notation BTC/EUR if it means 600 EUR per BTC? I use in the create offer screen a simple math formula like form:
I buy 1 BTC for 600 EUR/BTC (EUR per BTC) wich results in 600 EUR i need to spend.
1BTC * 600 EUR/BTC = 600 EUR
I think that is very straight. If I change to the finance worlds inverted logic that cannot be used anymore.

I think they have historical reasons. But I don’t see too much reason to help them to replicate mistakes forever.

With the altcoins it is planned to invert the price display so currently 50 ETH/BTC will be 0.02 BTC/ETH in future.

ISO 4217 is a standard first published by International Organization for Standardization in 1978, which delineates currency designators, country codes (alpha and numeric), and references to minor units in three tables: The tables, history and ongoing discussion are maintained by SIX Interbank Clearing on behalf of ISO and the Swiss Association for Standardization.

This aside, I’m a UX designer - and in terms of UX, the goal is to present to the user what they expect so it achieves a feeling of familiarity - even though it may not concur to the technical model.

Will consider to make it adjustable in the settings so user can define what they prefer.
I agree its good to follow standards, but it is a question if our main target are pro trader used to that strange notation or users who are not familiar with that and then the mathematiclly logical notation used now is much more intuitive.

One: well done, Dangermouse! This is ‘the editing of prose’ thang that I asked about recently – and Manfred responded so positively to. There is a tremendous amount to be gained by increasing user-friendliness on Bitsquare!

Two: I see, for example, ‘Price in AUD/BTC.’ This is a notation. But we could use prose instead: ‘The $AUD price of one BTC is XYZ.’

Three: let us be unendingly patient with each other here! We’ve wandered into the minefield of ‘prescriptivism’ versus ‘descriptivism.’ Emotional stuff. Convention (‘ . . . to present to the user what they expect so it achieves a feeling of familiarity . . . ‘) is the lodestone of language. But does that convention come from the ‘praxis’ (daily speech) of the native speakers of the language? Or from an organization? (Descriptivists say, ‘Native speakers!’ Prescriptivists say, ‘Organisation!’)

Side note, it’s not low hanging fruit but…

IMO Bitsquare doesn’t have the volume, liquidity nor the speed to represent itself with a traders/exchange interface with candlesticks and order depth which is uselessly confusing to most people except traders. And no trader would use Bitsquare with its current liquidity levels.

For the foreseeable future (say a year or more), it would make more sense to follow a really really simple ShapeShift style interface. 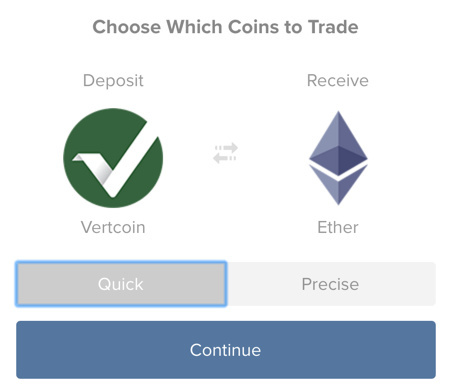 I agree with dangermouse on this one. The Greater Issue is, of course: ‘What do we want from cryptos?’ (fast sleazy riches? to provide competition for banks? to lay those banks low? to further a decentralised Internet? combinations of these?)

My personal First Base is: using cryptos as currencies in an environment not characterised by the sleaziness entailed by automated-exchange centrality. Thus, for me,a minor paradox – using Bitsquare is presently a not-for-the-guy-next-door undertaking – so we’re gonna help them! At every turn.

IndiaMikeZulu has been crashing about in the undergrowth, running low-budget-no-budget experiments in crypto adoption since 2013. We taken a long series of knocks, but now have first-hand experience of a wide range of the problems. Bitsquare is heaven sent, and we’ll work to integrate it into our model.

[ '[Anecdote: when we were running the ‘Denmark, Western Australia, Crypto Town Project’ in late 2013, we set up a well-advertised faucet. One thing we promised was 10,000 Dogecoin (our ‘training-coin,’ our ‘familiarisation coin’ – had an android wallet) for ‘anyone who lives in Denmark.’

Well, one morning on Reddit I found a post that went something like: ‘Ya. My name being Sven. I am from Denmark coming. Am I having 10,000 Dogecoin?’ I rolled about laughing. Gave Sven his Doge. And more to two other Danes who turned up. Then I explained that ‘Denmark’ is actually a little town on the very bottom left-hand corner of Australia.

And as part of this Project, we paid to have flyers distributed to every P.O. Box in Denmark. It’s cheap, and you put the flyers in the hands of the economic players in the town.]

I think this list can greatly benefit from another minor tweak: alignment. If the text was aligned right, or even justified it’s much easier to scan through

Cool idea. Next time I’m in NZ I’ll do that for the little town where I bought my holiday shack. Could be an interesting social experiment …

East Cape is under represented.

You should put your shack on CoinMap.

See that blip on the Coromandel? That’s mine. 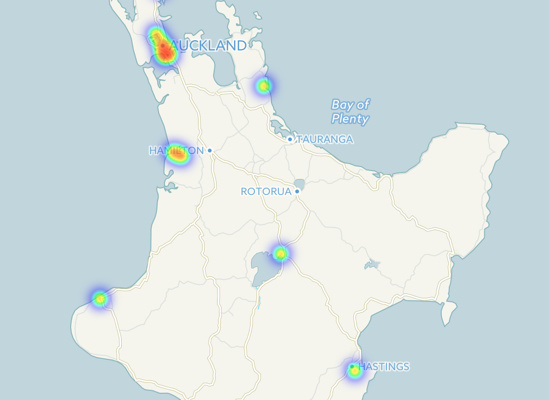 My ‘blip’ is currently north of Brisbane, I live on a yacht in Oz.