I placed a trade to sell BTC using Bisq. However, the buyer has been taking long to pay. The buyer later shifted the trade to paid status.

BISQ support closed the trade without asking for any kind of evidence from any of the parties the buyer now has my BTC and there is no deposit in my account. Why would support close out the trade and blindly assume I received payment when i did not? Seems very incompetent. I have done a few trades on BISQ but really not pleased with the above experience.

See the screenshot below: 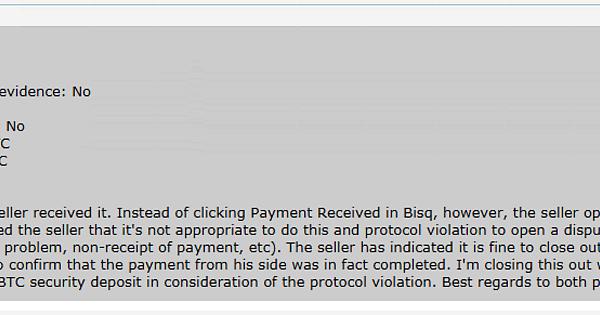 Contacted the buyer. He provided a screenshot and I noticed the error he made in typing in the email. He resent the deposit and I have now received it.

However, this could not have been the case. He could have simply walked away since he got the BTC and still had his cash. Bisq support needs to wait for input from both parties before closing a trade going forward unless you want to be held accountable for losses when dealing with payments that are not reversible like Bitcoin.

I don’t really know what happened here, but I have a theory that you (the seller) open a dispute before the max trade period was over, but not due to a bug or any other problem, just that you perhaps felt uneasy waiting for the trade to finish. Is this maybe correct?
If not, could you please explain to us so we know what actually happened here?

@cbeams @keo : Maybe you can add your comments?

Just made my updates in the original post. The following occurred.

However, this could have went very differently as the buyer was not obligated to deposit any funds in my account as it was closed successfully by support.

Support agents should not be allowed to close trades and take various actions when they are not arbitrators. I have done over 16 trades on Bisq and was quite pleased but this last experience was a little scary. The support agent did not do enough due diligence before closing my ticket and sending the BTC to the buyer.

The situation that led me to close this trade as I did is worth explaining.

I do not believe I was unreasonable in my actions, but again they have fallen short of one of the standards that Bisq arbitrators must hold ourselves to: that we get explicit acknowledgement of receipt of funds from the seller before closing a ticket out. When we fail to do this, we run the risk of creating the kind of chaos, upset, and frustration just as we’ve seen here.

Our standard operating procedure is to give parties 48 hours to respond an arbitration message before closing a dispute due to non-responsiveness. Here, I only allowed you 6 hours to respond before I took action for all the reasons above. In the future, I will wait longer in order to avoid this kind of situation.

For posterity, I’m including the full text of my comments in this dispute. They reveal no further information about the traders or the trade than what has already been divulged above. @Trader13, I’ve omitted your original chat messages as I have not asked you permission to include them. 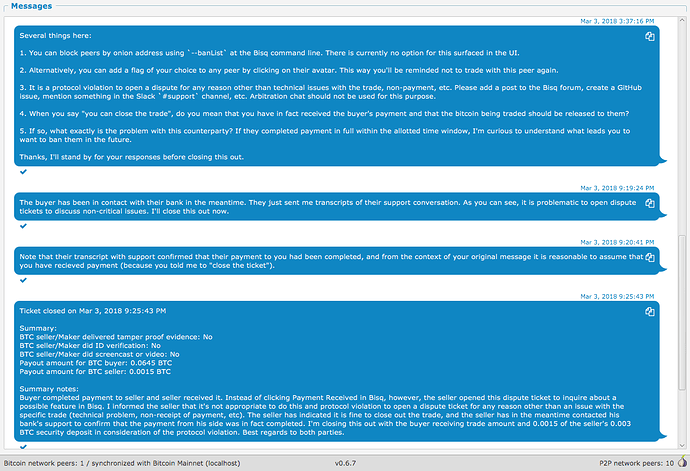 I hope this provides a satisfactory response for you, @Trader13. Thank you for taking the time to reach out here. This has been a good example of responsibly reporting an arbitration complaint.

Thank you for your professionalism. I had not read the rules and figured I could submit feedback via support ticket. Did not know it served the same function as the arbitrator. In the end it appears the traders on Bisq are honest people and he corrected the email error he made and sent me the payment.

Bisq has a lot of potential and I will continue to use it. Once a mobile app is present then Bisq growth will rocket since it is a slight inconvenience to only have the desktop app currently. But great work overall.

Now that you say it, a mobile App might actually make sense!
A while ago, when I started using Bisq there weren’t many offers so I often created my own ones and then had to let the computer run for a few hours with the App open, which led me to believe that a mobile App doesn’t make a lot of sense as the phone is usually in stand-by.
But at the moment, and definitely more in the future, there are usually enough open offers so as a taker, being online for just a few minutes to take an offer and to send the payment, would be enough and possible on mobile!
I wonder if there are already plans for that?
@ManfredKarrer ?

Also when mobile apps can have certain tasks that run in the background. You will not need to have the app open. You simply place your offers an continue using your phone as normal. Once your offer is accepted you get a notification and can open the app.

A native mobile app is the way to go for Bisq if they expect to get more mainstream adoption. I think it is imperative that it is added to the roadmap if that is not planned seriously. The current desktop app is good enough and additional efforts can be directed to getting mobile apps developed imho