Stuck on waiting for confirmation

Seems the peer used an older version where there have been issues causing that problem.
you can open a dispute with cmd+o or ctrl+o. the arbitrator (me) will check then the case. but it seems no funds have left your wallet.

I still have about 3 days left until this times out. Is there anything I can/should do to speed things up? E.g. can/should I open a dispute now? I’m quite eager for the transaction to go through if possible.

Unfortunately we cannot do much but wait. In the next release we add fee estimation so those cases should not happen anymore.
That the peers tx fee is not showing the confirmations is expected as it is a tx which is not related to your wallet.

Thanks Manfred. I just want to check that you understand what I’m saying though: Both the “Offer fee transaction” and the “Taker fee transaction” are confirmed on the blockchain. So what am I now waiting for? Is there a further transaction that needs to confirm before I can proceed with the trade? Thanks again!

So the deposit tx (Multisig) is not confirmed, right? That might be due to blockchain spam. But usually it should get into the chain in 1 or 2 days. Worst case that the trade times out and it will lead to a dispute, then both traders get back what they have paid.

Ah, is there any way I can easily find the deposit tx? It’s only the offer fee and taker fee transaction IDs I can find (in the Trade Details popup). I’ve tried to follow those transactions with blocktrail and everything I can find that’s related now has at least 130 confirmations. I’ve managed to follow transactions from both the offer fee, and the taker fee transactions through to one single address that they both sent money to. That appears to have a “confirmed balance” matching the bitcoin that I am trying to buy, along with the deposits from both of us, etc.

I fully understand the issues with the blockchain backlog and the delays it can cause. I’m just struggling to find what transaction is stuck. For instance, I’m interested to see what fee was included with it. But I can’t find any relevant transaction that’s unconfirmed.

Ah, is there any way I can easily find the deposit tx?

You should be able to view all relevant transactions when you click on the trade ID (->Portfolio, ->Open trades, upper half of the screen). It might be, that you can’t see the link to ‘deposit tx ID’ at the early stage your trade’s in but I think it should be there.

Woops, I see the field now “Deposit transaction ID”. But it’s completely blank. The cursor changes to a hand pointer when I hover over the blank space, as though I should be able to click it. But clicking it does nothing, and nothing happens when I use either the open in blockchain explorer, or copy to clipboard functions. So this definitely seems broken…

FYI The lower half of the window says:

Deposit transaction has been published.
You need to wait for at least one blockchain confirmation.

So if that’s true it definitely should be possible to find the transaction somewhere, somehow, right?

So I’ve found a bitcoin address that has one transaction with two inputs with values that match what I would expect as what my trading partner and I have paid in to the trade. It also has a P2SH output, the BTC value again matching what I would expect. So this looks like a good contender for the “deposit tx”. This transaction now has over 250 confirmations.

I understand this will probably get sorted out by the arbitrator, I’d just like to understand what’s going on a bit better if anyone has some insight. Thanks!

I now have a “Warning” message pop up that says:

The deposit transaction still did not get confirmed. That might happen in rare cases when the funding fee of one trader from the external wallet was too low.

I just want to point out that I don’t think that’s what’s going on in my case - because I can see that the funding transactions from both me and my trading partner confirmed fully a long time ago. So perhaps my trading partner is using an older version that has some kind of bug, as Manfred mentioned in his original post in this thread.

Also it looks like the transaction backlog has been completely cleared several times in recent hours: https://jochen-hoenicke.de/queue/2h.html

Only a few hours left before the trade times out now.

So perhaps my trading partner is using an older version that has some kind of bug, as Manfred mentioned in his original post in this thread.

That’s a possibility. I can’t look into it but the arbitrator will do and sort it out. Manfred is travelling, so it might take a little longer than usual.

Thanks for your patience and interest in the subject. I’m as curious as you are.

Ah, that’s interesting. Once the trade timed out, and when I clicked the “Open Dispute” button, I get a popup window with the following:

Sorry for the inconvenience but that error case should be happen very rare and in future we will try to find better ways to resolve it.

So clearly this kind of bug was already anticipated! I’ve selected the transaction I found earlier, so lets see what happens next…

Hi, I closed the case and the payout is published. Never saw that bug before… I am traveling atm so have limited time to investigate. If still any issues please ping me by email.

Thanks Manfred. Thanks especially for handling this even though you’re traveling!

Like I said, I’d still like to do the original trade, and I see that my original trading partner has now opened a new offer to sell. I’m worried that it might go the same way if I trade with this person again. Is that likely? I mean, is the issue related to the software they’re using, or is it just a random glitch? Basically, do you think I should try trading with the same person again or not?

Many thanks for all your help, and you too marc!

Went ahead anyway and it went through without a hitch.

Ah good! I never saw that bug before. Might be caused from rare edge cases (e.g. a trader closes app too quickly after an important trade msg is sent,…).

This bug might strike more often than expected. Right now my trade partner and I are in the middle of a stuck situation, too.

Oh, if the deposit tx is not displayed there is something wrong. you can open a dispute by cmd+o/ctrol+o. I am traveling tomorrow so might take a bit for a reply…

Okay, I started several attempts to take my part to resolve this incident. With no success so far. And no clue.

On cmd-o this dialog pops up: 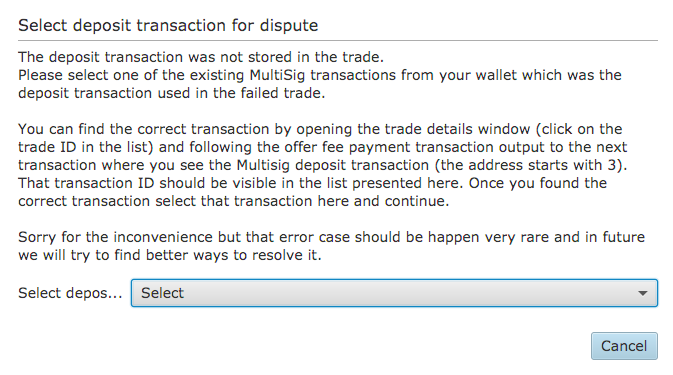 Furthermore, the drop-down menu holds five hash values to select from to continue in this dispute, whereas none of them has any appearance elsewhere. To me, they’re totally unrelated. The json-formatted contract doesn’t bring any clarity either.